"You are elite US sniper Karl Fairburne. Parachuted into Berlin amidst the Germans’ final stand, your mission is to prevent Nazi V2 rocket program technology from falling into the hands of the besieging Red Army. You must aid key scientists keen to defect to the US, and terminate those who would help the Russians."
— Official description on Rebellion's website 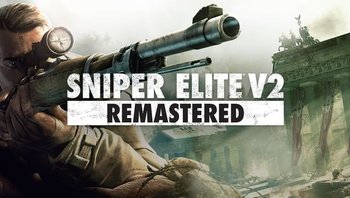 In the dark days of the end of World War Two amidst the ruins of Berlin, one bullet can change history…Now in remastered visuals.
Advertisement:

A Continuity Reboot of the original Sniper Elite for the Xbox 360, PlayStation 3, Wii U, and PC via Steam.

The overall plot is similar to the first game. You are once again Karl Fairburne, an OSS officer who is inserted into Berlin in 1945; only your mission is to kill V2 scientists and seize information related to the V2 Missiles before the Soviets can get their hands on them.

The story takes place in Germany during the final days of WWII and the player must navigate and fight their way through a city crawling with both Nazi and Soviet troops. As part of the Operation Paperclip program, Karl must find and identify several German scientists who want to defect away from the crumbling Nazi regime, killing the ones who join the Soviets and protecting the ones joining the Americans. Partway through his mission, though, he discovers that the Soviet-leaning scientists have decided to prove their loyalty to Stalin by using their Wunderwaffe against an unsuspecting target, and Karl must now fight his own ostensible allies to stop them.

The overall game play has been tweaked but should be familiar to anyone who played the first game. One of the new features is the X-Ray Kill Cam. On certain shots you get to see the damage and trauma your bullet causes as it passes through the target. It can be gory and visceral to see your bullet put out an eye, smash through some organs, and shatter bones.

The game still has stealth elements but they are focused more on staying out of direct line of sight and noise discipline. Also hiding bodies can prevent an enemy from frantically combing the area searching for a hidden sniper. Some elements like shot maskingnote Firing when there is a loud environmental sound, preventing enemies around the target area from hearing your gunshot is still present, but only in certain areas.

The multiplayer has been changed up a bit from the previous game to include a Coop Campaign and new multiplayer modes.

There are four DLC packs that have been released for the game: The Landwehr Canal Pack, the Neudorf Outpost Pack, the formerly-Pre-Order Bonus Kill Hitler mission, and St Pierre. All of the packs introduce new missions separate from the main game and add new weapons.

Up to 8 free multiplayer maps have been released for the game along with various updates to make them compatible with the game types.

A "Game of The Year" edition has been released that contains all the DLC content in one package. Some versions of the GOTY edition do not include the mission from the Landwehr Canal Pack, but include the weapons.

A standalone expansion, Sniper Elite: Nazi Zombie Army, was released in late February 2013. Its features include a 1-4 player co-op campaign, incredibly dense clusters of lumbering enemies, new weapons (including shotguns), all weapons from the original game and its DLC, and the stealth elements of the main game largely removed due to the sheer number of enemies you're facing.

An Updated Re-release called Sniper Elite V2 Remastered was released on May 14, 2019, updating the graphics and bundling all Downloadable Content for free, and released for PC, Xbox One, Playstation 4, and Nintendo Switch.

Just as Karl Fairburne finds intel on a possible missile launch site, he's ambushed by a Soviet sniper team sent out to kill him. Only the brief white glint of one of the enemy sniper's rifles prevents him from getting shot in the head.

Just as Karl Fairburne finds intel on a possible missile launch site, he's ambushed by a Soviet sniper team sent out to kill him. Only the brief white glint of one of the enemy sniper's rifles prevents him from getting shot in the head.