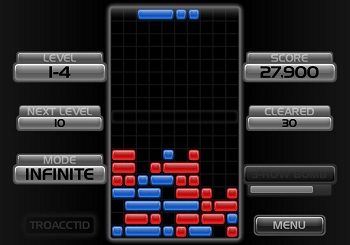 Slydris is a Falling Blocks Puzzle Game published by Radiangames and the Apple App and Google Play stores. It was released on July 26th, 2012.

Horizontal blocks of various sizes and colors drop from the top of the screen, and your job as the player is to destroy them by completing a horizontal row (Tetris-style). You do this by sliding (slyding?) the blocks left and right. More blocks drop down, so you have to stay on your toes to keep the stack from reaching the top.

There are three game modes: