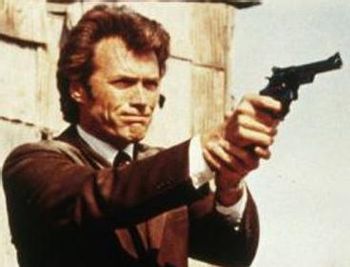 The .44 Magnum. Guaranteed to blow your head clean off. Feeling lucky? Well do ya, punk?
"...possibly more than the automobile, the handgun is synonymous with America."
— The Zombie Survival Guide
Advertisement:

Military stories, of course, treat this trope differently, as rifles and other military-grade weapons are standard-issue for front-line combatants. Handguns are often issued to support personnel who work near the front line but not in combat roles. In combat they are often the reserve of commissioned officers, particularly in more historical settings. Despite what military video games may have you believe, it is uncommon for a rank-and-file soldier to carry both a rifle and a handgun, so merely having one often marks out a soldier as either an officer or support personnel; a small self-defence handgun is common for a Combat Medic.