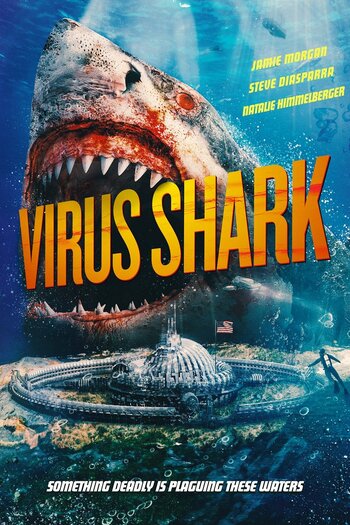 Virus Shark is a Horror Movie by Mark Polonia.

A deadly new virus has spread across the globe. Because the original carrier of the virus is sharks, it has been dubbed SHVID-1 (Sound familiar?), and the world has been thrown into chaos by it.

Humanity's last hope lies with a team of scientists at the bottom of the ocean, in the Cygnus Research Facility. This includes Gregory McLandon (Titus Himmelberger), Anne Satcher (Natalie Himmelberger), and Kristi Parks (Jamie Morgan). There's also the base engineer Rikter D'Amato (Steve Diasparra) and security guard Duke Larson (Ken Van Sant). These people need to find the cure for humanity while there's still a humanity to save. And they may have found it with the latest batch of corpses.

However, between a containment breach, and a conspiracy by Gregory and Shannon Muldoon (Sarah Duterte) may complicate things.