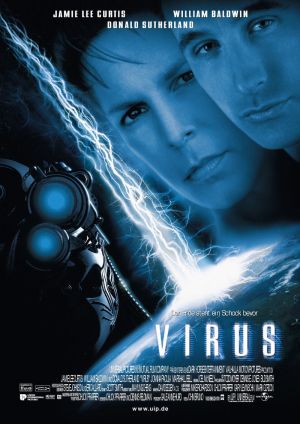 Nothing depicted on this poster actually happens.
"Who are you?"
I AM AWARE
"We mean you no harm."
LIFE-FORM ANALYSIS COMPLETE. SPECIES IS DESTRUCTIVE, INVASIVE, NOXIOUS, HARMFUL TO THE BODY OF THE WHOLE.
"What species?"
MAN
YOU ARE VIRUS
Advertisement:

The film revolves around the crew of a tugboat, the Sea Star. After barely entering the eye of a hurricane, they see another ship on the radar — the Akademik Vladislav Volkov, a Russian missile and satellite tracking ship. With their boat taking on water faster than they can pump it out, the crew boards the Volkov, where they find that the electronics have been powered down and the crew has abandoned ship. Once they power up the ship, bad things happen.

Another, unrelated movie with the same title came out nineteen years before this film.