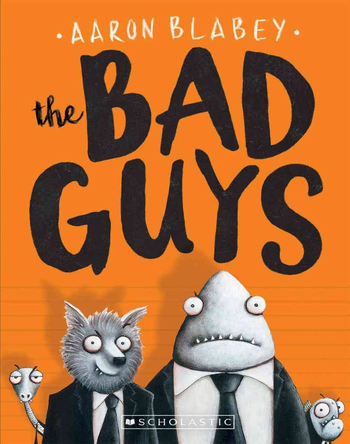 Good deeds: whether you like them or not! note From left to right: Mr. Snake, Mr. Wolf, Mr. Shark, Mr. Piranha.
They're scary, they're dangerous, they're just plain bad! But they're also very nice!
Advertisement:

The Bad Guys is a series of children's graphic novels by Australian author and artist Aaron Blabey.

The series centers around Mr. Wolf, Mr. Snake, Mr. Piranha, and Mr. Shark, four predators that decide they no longer want to be bad guys anymore, and decide to turn to the side of good. Unfortunately, they’re not the best at this.

A spinoff book series, Cat on the Run, is currently in development.

A movie based on the series by DreamWorks Animation, with Blabey as an executive producer, was released in April 2022.

The Bad Guys provides examples of: