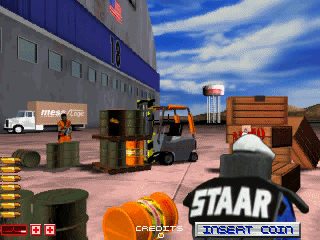 A 1995 arcade light gun game, Area 51 puts the player in the role of a member of an elite military unit called the Strategic Tactical Advanced Alien Response (STAAR). Their mission is to enter the titular base, shoot through a small army of zombified military and science personnel and prevent an alien race known as the Kronn from taking over the facility by triggering a nuclear device, destroying it and everything inside of it.

It was followed by Area 51: Site 4 in 1998, which improved the graphics and replaced the linear stage progression with a set of unconnected "field exercise" missions, effectively making the game both a figurative and literal Mission-Pack Sequel.

Not to be confused with the first person shooter of the same name released in 2005.

Atari and Midway will notably develop a similar game, Maximum Force a couple of years later.