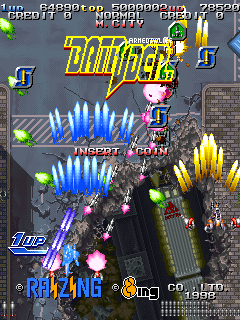 Armed Police Batrider is a Vertical Scrolling Shooter developed by Raizing and released in arcades in 1998. It is the Spiritual Successor to Battle Garegga.

In 2004, crime in Manhattan was at an all-time high. It had earned a reputation as a VIOLENT CITY. Even law enforcement was unable to deal with it, until GiganTech Cybernetics Corporation stepped forth and assembled the artificial island Zenovia.

Unfortunately, fast forward to 15 years later, where crime in Zenovia has gotten to the point where it's pretty much worse than it was in Manhattan. An investigation into GiganTech reveals that it is run by Corrupt Corporate Executives who had, in actuality, set up Zenovia as a base for their latest black market weapons.

Nine fighters—three top-tier police officers, three Boxed Crooks, and three psychics—are drafted as "Zero-Cops" and dispatched via the BatRider airbikes to liberate Manhattan from its criminal shenanigans and crush the CEO of GiganTech, Taiga Gigayama.

Batrider rides heavily on the Battle Garegga formula, with its highly destructible terrain, challenging enemy and bullet patterns, ever-changing difficulty, and dozens of secret scoring tricks. However, it also adds many new features, such as a more vibrant color scheme (vs. Garegga's Real Is Brown) and a The King of Fighters-style team system in which the player can select three of eighteen different ships (alternating to the next ship on a life loss). If you liked Battle Garegga, or simply like Bullet Hell games in general, this just might be the game for you.