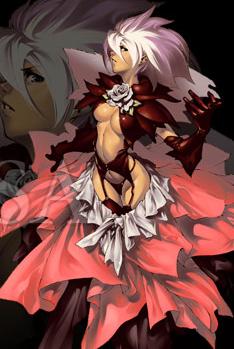 Every rose has its thorns / Bullets enough for a world war to adorn
Advertisement:

Ibara is a Bullet Hell Shoot 'Em Up by Cave. Teresa Rose announces the creation of a massive Rose Garden with the power to take over the world, so two "negotiators", Bond (Red) and Dyne (Blue), must stop her and her daughters.

It received a sequel named Pink Sweets in which the bosses of Ibara (except for Teresa Rose) are now the playable characters. They must rescue their mother from her ex-husband Big Burn and his maids.

The game series as a whole is notable for being programmed by S. Yagawa, who also worked on many 8ing/Raizing games such as Battle Garegga and Armed Police Batrider.

A region-free port for Pink Sweets for the Xbox 360 was released in a double-pack with Muchi-Muchi Pork.