Video Game / Aka to Blue 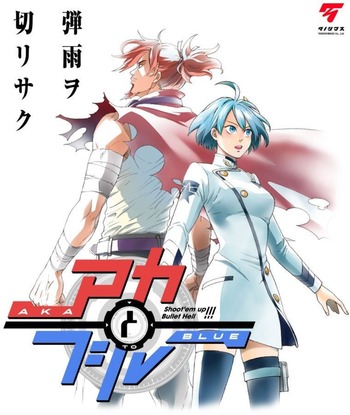 Our heroes, Aka Sheenk (left) and Blue Cerny (right).
Advertisement:

Aka to Blue (アカとブルー, officially translated as Aka & Blue), is a Vertical Scrolling Shooter for iOS and Android by the development team Tanoshimasu, and was released in 2017.

The game is a top-down Bullet Hell shooter that borrows heavily in terms of gameplay style from CAVE's games. Unique to this game is its take on the Smart Bomb: Firing at enemies and destructible bullets and cancelling bullets with your bomb raises a Charge gauge, which can be expended to fire a bomb, the strength of which is dependent on your Charge level when you fire it. Firing a bomb clears out bullets in its path, and also generates star items as it plows through enemies, alongside the stars that are normally dropped when destroying enemies.

An Updated Re-release for arcades, Aka to Blue Type-R, was released for the exA-Arcadia platform. A 3-stage location test was held in some arcades in Japan, as well as game-related events in France and the United States.

There are currently no known plans to bring the game to console or PC.

Has no relation to fellow shmup Akai Katana.

Aka to Blue contains examples of: