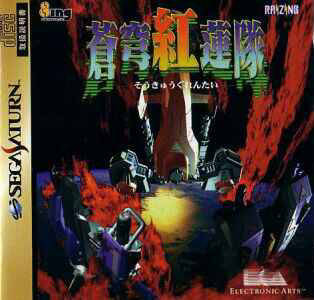 Soukyugurentai (a.k.a. Terra Diver) is a Vertical Scrolling Shooter published by 8ing/Raizing in 1996 for the Sega Saturn ST-V hardware, later ported to the Sega Saturn proper and the Playstation. Its gameplay is distinguished by having lock-on weapons similar to the RAY Series, except able to lock on to 3-D wireframe areas. Its music was composed by Hitoshi Sakimoto and Manabu Namiki.
Advertisement:

In the year 2050, space mining operations are becoming competitive as the Eight Luck Interstellar Development Inc. starts muscling in on other companies in an aggressive manner. The Jin-Sei Corporation teams up with Japan to counteract Eight Luck. It is now up to a few pilots and their advanced space ships to save the day.

Soukyugurentai contains examples of the following: