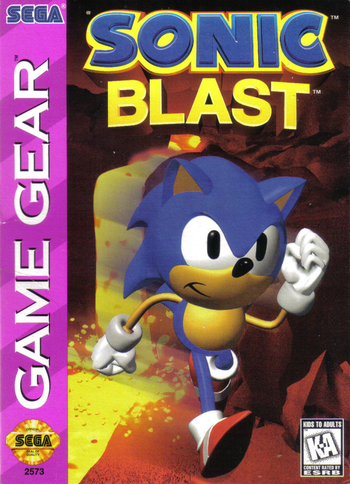 Get ready to blast off!
Advertisement:

Sonic Blast (G Sonic in Japanese) is a 1996 Game Gear Sonic the Hedgehog game, and the penultimate game Sega released for that system, preceding The Lost World: Jurassic Park. (As usual, it was also converted to the Master System for the Brazilian market.) The title allows the player to pick from Knuckles, with his signature gliding and climbing, or Sonic, who can double jump. The game is unusual in that the amount of rings one loses from a hit varies from 10 to 30 depending on the source of damage, and Dr. Robotnik (aka Dr. Eggman) only takes damage if he gets hit on the windshield of his Egg Mobile.

Being released near the end of the console's lifespan, the game experiments with pre-rendered graphics Donkey Kong Country style, with limited success given the reduced horsepower behind the system. Sonic Blast is often seen as the worst of the five main Sonic platformers on the Game Gear and Master System, with its slow speed, muddy graphics, highly inconsistent difficulty and far clunkier gameplay (even with the addition of Knuckles as a playable character) being common complaints. Even then, Sonic's next portable outing — the Game.com version of Sonic Jam that was released the following year — is even worse in those regards.

The game can be found on Sonic Adventure DX and Sonic Mega Collection Plus, and as an unlockable demo on Sonic Gems Collection.