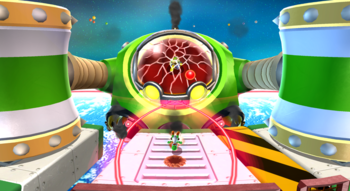 Two guesses where the weak point is.
That robot needs a less glaring weak spot.
Advertisement:

That is, certain Boss Fights look very threatening, but all you need to do is hit the incredibly obvious glass chamber — which can either hold the pilot, an exposable core system, or whatever they decided to put behind it — for massive damage.

These are incredibly common around machinery bosses, such as against a Humongous Mecha, Walking Tank, or a Battleship Raid; the latter being less commonly used.

This trope can also be combined with Colossus Climb if the weak point is high up on a structure.

Subtrope of Attack Its Weak Point and usually falls under Shows Damage as well. Compare with Go for the Eye and Sniping the Cockpit. See Vehicular Assault.