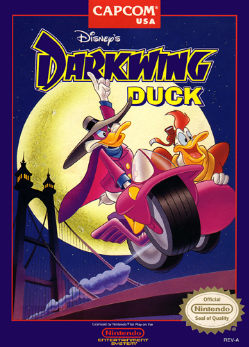 Let's Get Dangerous... in 8-bit!
Advertisement:

A Licensed Game based on Darkwing Duck, released by Capcom for the Nintendo Entertainment System in 1992. It was later ported to the Game Boy in 1993, with a few alterations.

A mysterious crime wave has hit the city of St. Canard, and S.H.U.S.H. requires the services of Darkwing Duck to stop it. It appears that F.O.W.L., lead by Steelbeak, is behind it. They have hired six of Darkwing's greatest foes to wreak havoc in different areas of St. Canard. Darkwing must subdue each of these criminals in order to find Steelbeak and save the city.

The game is a platformer with elements similar to Capcom's Mega Man (Classic) video game series, even using a modified version of Mega Man 5's game engine. Darkwing can use his gas gun to take down enemies, which functions similarly to how Mega Man controls except DW can only fire while standing still or jumping straight up. He can also drop through and grab onto the bottoms of platforms, giving him some control versatility compared to Mega Man. There are three different stages at the start of the game that can be tackled in any order, and three more become available after they are cleared. Once all six stages are clear, Darkwing can proceed to F.O.W.L.'s floating fortress for the final battle with Steelbeak.

In March 2017, Capcom produced a re-release set in the form of The Disney Afternoon Collection, which includes Darkwing Duck, both original DuckTales games, both original Chip 'n Dale: Rescue Rangers games, and TaleSpin for PlayStation 4, Xbox One and Windows (through Steam).

Not to be confused with the TurboGrafx-16 version of the game released by Interactive Designs in the same year.