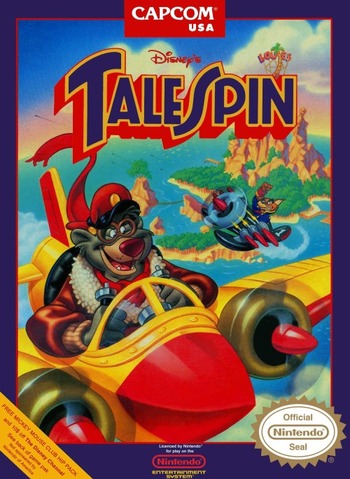 A Shoot 'em Up based on TaleSpin, released by Capcom in 1991 for the Nintendo Entertainment System. It was later ported to the Game Boy in 1992, with a few alterations.

This game involves the adventures of Baloo and Kit Cloudkicker, two bears delivering cargo for Rebecca Cunningham, the owner of Higher for Hire. However, Shere Khan, the evil tiger tycoon, wants to put Rebecca out of business so he can acquire Higher for Hire in a hostile takeover, so he hires air pirates, led by Don Karnage, to do his dirty work.

In March 2017, Capcom produced a re-release set in the form of The Disney Afternoon Collection, which includes TaleSpin, both original DuckTales games, both original Chip 'n Dale: Rescue Rangers games, and Darkwing Duck for PlayStation 4, Xbox One, and Windows (through Steam).