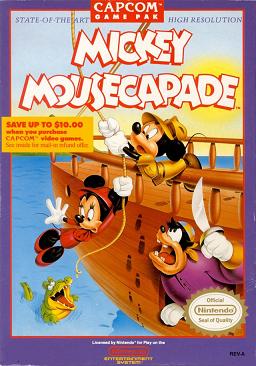 Mickey Mouse? First of all...
Advertisement:

Mickey Mousecapade, or Mickey Mouse: Adventures in Wonderland as it was originally titled in Japan, is the earliest known Disney-based video game to be released on the Nintendo Entertainment System, and one of the few not developed by Capcom (although they did publish its American release, it was developed by Hudson Soft). The game follows Mickey and Minnie Mouse as they venture through Wonderland to find their mystery friend, who is being held captive by the evil Queen of Hearts Maleficent. Along the way, though, a lot of the creatures they encounter have decided for no apparent reason that the mice need to be exterminated, so Mickey and Minnie have to fight these creatures off as they look for their friend.

In gameplay terms, the game is a fairly standard side-scrolling platformer, with Mickey and Minnie navigating jumping puzzles, collecting keys to unlock doors and shooting nondescript "stars" at enemies. This might have been a surprise to any parents who were hoping for something less violence-intensive than, say, Super Mario Bros. Minnie lagged slightly behind Mickey, much like the second Ice Climber in Super Smash Bros. Melee, and could occasionally be kidnapped by a random bird, forcing Mickey to get her back.