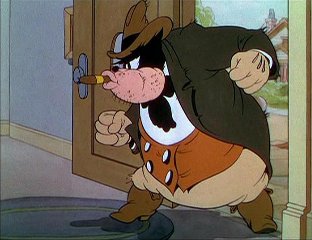 Not Pete's usual state of dress, but fitting nonetheless.
Advertisement:

Pete is a large anthropomorphic cat from the Classic Disney Shorts who is constantly causing trouble for Oswald the Lucky Rabbit, Mickey Mouse, Minnie Mouse, Donald Duck, Daisy Duck, Goofy and Pluto (all of whom, ironically, he predatesnote that is, "precedes in time", not "preys upon", although a case can be made for the latter).

Pete's brand of villainy has evolved subtly over the years, his intelligence is optional and his goals range from a simple con to taking over a country, but one thing remains the same in this selfish, menacing brute — Pete is up to no good. He gets what's coming to him with perfect Laser-Guided Karma, and yet he never learns.

As a villain and antagonist, Pete's most notable trait to date is that he has never learned the difference between fear and respect. As opposed to many Disney villains who lust for power over a state, Pete is a bully who desires and settles with control over a small number of people; a goal that can never be accomplished since he has never displayed any self-control himself.

He debuted in the Alice Comedies short "Alice Solves the Puzzle", and also appeared as a bear in some of the Oswald the Lucky Rabbit cartoons. This makes him the oldest Disney character that is still in use today.

His current official voice actor is Jim Cummings (the one who also voices Winnie-the-Pooh, Tigger and Darkwing Duck).

Not to be confused with the storybook series Pete the Cat.

Tropes That Apply to Pete:

Like the Troubadour said: "When ze bad guy is that happy, it always, always means... BAD GUY SONG!"

Like the Troubadour said: "When ze bad guy is that happy, it always, always means... BAD GUY SONG!"