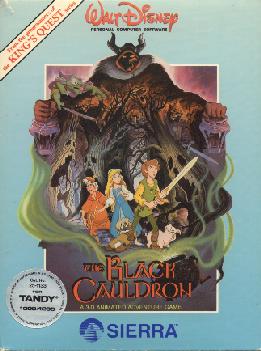 The quintessential example of No Problem with Licensed Games.
A video game adaptation of Disney's The Black Cauldron was designed by Al Lowe and released in 1986 by Sierra, which was designed to be similar to Sierra's King's Quest series. Along with The Dark Crystal, it remains one of only a few adventure games by Sierra (prior to the Vivendi buyout) to be based on a film.
Advertisement:

The player character is a young assistant pig keeper, Taran, undertaking a quest to stop the evil Horned King, who seeks for Hen Wen, the magical pig of the wizard Dallben, for her visionary abilities. With these abilities, the King would be able to discover the Black Cauldron and rule the land. Taran is tasked with taking her to safety, but the game differs from the plot of the film in the first of several ways in that Taran is able to succeed in doing so. The game actually featured plot branches and Multiple Endings depending on many variables, such as whether Hen Wen the pig was saved, how the cauldron was destroyed, and what reward was chosen afterwards. This use of multiple endings predated the more famous use in Maniac Mansion by a year.

In order to make the game more accessible to children, Sierra used an innovative idea that would not re-appear in the genre for the next 10 years: The text parser that was used in the company's earlier graphic adventure games was removed in favor of the function keys that performed various actions: F3 would choose an inventory item, F4 would use it, F6 would perform "Use" near the character's location, and F8 would "look." The simplification of the two actions "Look" and "Use" was not reused in Sierra's later games. However, it somewhat resembles the control system of other later, simpler point and click adventure games, such as the King's Quest VII: The Princeless Bride or The Dig whose interfaces only consisted of "Look" and "Use." Being based on a Disney film, the graphics present some relative "flexibility," compared to the monolithic and straight backgrounds of previous and later games.