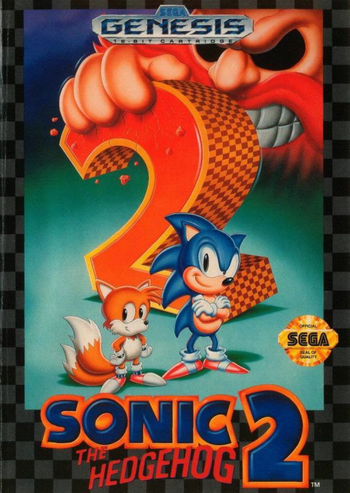 Are you up 2 it?!
An attitude, tons of enemies, and a running mate with the mind of a four year old. (No, it's not another presidential election.)
— EGM Promo for the game

The sequel to the original Sonic the Hedgehog, this game introduced Sonic's sidekick Tails, along with Sonic's Emerald-charged Super Form. It is the second-best selling Genesis/Mega Drive game of all time, selling over six million copies, only outsold by its predecessor's 20,000,000 mark. However, most of Sonic 1's sales came from being a pack-in to the Genesis, with 4 million selling standalone, so Sonic 2 is technically the best-selling standalone game for the console.

Like its predecessor, Sonic the Hedgehog 2 had both a 16-bit and 8-bit version, and both versions had different stories. The 16-bit version was released for the Sega Mega Drive in Japan on Saturday, November 21, 1992, and in Europe and North America on Tuesday, November 24, 1992, a date which was marketed as "Sonic 2sday." It was the very first global launch for a video game, an event which redefined video game marketing and helped Sonic 2 become such a groundbreaking success.

While out adventuring, Sonic lands his biplane, the Tornado, on Westside Island to take a break and explore a bit. Whilst running about, he attracts the attention of Miles "Tails" Prower, a shy fox cub who was ostracized for his two tails, who becomes inspired by the blue blur's cool confidence and starts following him. Sonic is surprised to find the young tagalong can nearly match his speed by rapidly spinning his tails like a helicopter's propeller, even enabling him to fly, and the impressed hedgehog allows the kid to stick with him — a decision he'll soon be glad he made.

For while these two are meeting, Dr. Eggman, a.k.a. Dr. Robotnik, has begun operations on the other side of the island, managing to covertly produce a new generation of Badniks. He's arrived on Westside Island after becoming privy to legends that tell of a lost seventh Chaos Emerald — and not long after, realizing that it and the other Emeralds had made Westside's depths their new hiding place after his defeat on South Island. Using the Emeralds' combined power, he hopes to complete his personalized space station, the Death Egg. After learning about the doctor's mad plan, Sonic and Tails team up to stop him.

Sonic the Hedgehog 2 kicks everything up a notch. Sonic moves faster, there are more different Zones (albeit with only two Acts instead of three like in the original), and the levels tend to be a bit longer. The game also introduces the Spin Dash, a technique in which the playable character spins in place to rev up before taking off at high speed, which allows players to easily destroy Badniks or traverse slopes and loops.

The game can be played as Sonic, Tails (who can't fly as of yet), or Sonic and Tails together. AI-controlled Tails will mimic your movements, but can also be controlled by a second human player. Sonic 2 also included split-screen versions of three Zones that can be enjoyed by two players just for fun.

Special Stages were retooled. They can be accessed by collecting 50 rings and jumping into one of the game's many checkpoints. This transports the player to a 3D half-pipe tube in which you have to grab a set number of rings while avoiding mines, with the reward being one of the Chaos Emeralds. Obtaining all seven Emeralds lets Sonic morph into "Super Sonic", who is impervious to most damage, possesses even faster speed, and has a higher jump, but requires 50 rings to transform and consumes rings to stay in this form.

Attaching this game to Sonic & Knuckles will add Knuckles as a playable character in an entirely new version of the game titled Knuckles the Echidna in Sonic the Hedgehog 2. Knuckles retains his full moveset from the sequel and can even turn into Super Knuckles after collecting the Chaos Emeralds.

In 2013, hot off the heels of the Sonic 1 and Sonic CD remasters, Sonic the Hedgehog 2 (and, by extension, Knuckles in Sonic 2) was also remastered in the Retro Engine in 2013 for iOS and Android devices by Christian "The Taxman" Whitehead (of Sonic Mania fame) and Simon "Stealth" Thomley, featuring all of the improvements those remasters received. As with Sonic 3, Tails also has the ability to pick up Sonic, fly, and swim. The remaster also added a Boss Rush mode and Hidden Palace Zone, the latter of which was famously cut during development, but lingered on as a Minus World in the finished product. The two-player mode also underwent an upgrade: Chemical Plant Zone, Aquatic Ruin Zone, Hill Top Zone, and Oil Ocean Zone were made available; Knuckles is no longer confined to the single-player experience; both players can use the same character competitively; and each player's screen occupies their own device rather than appearing in a split-screen as in the original. As of November 21, 2017, the remastered re-release of Sonic 2 was included in the Sega Forever line-up of ad-supported free-to-play titles along with Sonic 1 and later Sonic CD. All three of these games, plus a similarly remastered version of Sonic 3 & Knuckles, are included in the Sonic Origins Compilation Rerelease.

In 2015, another remake was released for the Nintendo 3DS titled 3D Sonic the Hedgehog 2. Developed by M2, it's the final game in their 3D Classics series for the handheld. In addition to 3D-enhanced visuals, the game also comes with the ability to play either the International or Japanese versions, an optional screen filter which emulates the look of a CRT television, a stage select screen (previously available through a cheat code), the ability to record replays, a save state feature, and finally, a new "Ring Keep" mode which eases less experienced players in by starting each stage or life with 10 rings and only taking half of them if they get hit. In 2020, this version was also released on the Nintendo Switch under the "SEGA AGES" line, featuring most of the same content minus the 3D visuals, but adding extra features like Knuckles, the Drop Dash from Sonic Mania, and leaderboards.

Elements of this game (and Sonic 3 & Knuckles) would get loosely adapted in the 2022 sequel film to Sonic the Hedgehog (2020) of the same name. For tropes related to that film, go here.

ARE YOU UP 2 IT?
Feedback

Before Sonic confronts Dr. Robotnik at the Death Egg, he has to fight Mecha Sonic aka Silver Sonic, the most powerful Badnik ever created by the doctor.

Before Sonic confronts Dr. Robotnik at the Death Egg, he has to fight Mecha Sonic aka Silver Sonic, the most powerful Badnik ever created by the doctor.