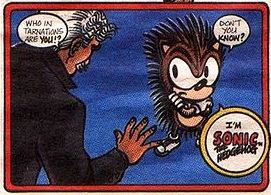 A not-so-blue, spunky insectivore meeting his soon-to-be archnemesis.
Kintobor: "Who in tarnations are you!?"
Sonic: "Don't you know? I'm Sonic the Hedgehog™"
Advertisement:

A very interesting entry from the earliest days in the Sonic the Hedgehog series, this 16 page oneshot promotional comic (simply named Sonic the Hedgehog Number 1) was crafted by Sega of America, with writing and artwork by Francis Mao, in an attempt to provide an origin story for Sonic in the western world, as well as promote his debut video game.

The comic starts in the Green Hills of South Island, located on the planet Mobius, with Sonic rescuing his animals friends from several badniks created by a new local villain, the evil Dr. Ivo Robotnik. Worried, they question where their friend Dr. Ovi Kintobor is, only for Sonic to drop the bad news—that Kintobor is Robotnik! He then flashes back into an origin story, where Sonic explains how he first met Kintobor.

His tale begins back when he was a prickly, brown hedgehog, with him accidentally burrowing into Kintobor's underground laboratory. By chance, the good doctor is working on a machine called the Retro-Orbital Chaos Compressor— or just R.O.C.C. for short. The machine is powered by six mysterious objects called the Chaos Emeralds, with their power kept in check by a series of gold-colored Containment Rings, and as soon as he finds the seventh Gray Emerald to counteract the other six in the machine, he plans to use the machine to rid the world of all evil by absorbing it directly into itself. Sonic and Kintobor become fast friends, and after a freak accident involving a treadmill (due to Sonic wanting to kick the mass versus velocity theory in the dirt) Sonic's fur is turned from brown to cobalt blue, and his quills are permanently fused together from the heat of the speed he was going at—as a token of goodwill, Kintobor promptly gives him a special pair of friction-less shoes to replace his old ones.

But one day, Kintobor spills a drink on the R.O.C.C. controls, causing the machine to go haywire; not only scattering the R.O.C.C.'s Containment Rings all over South Island, but also bathing Kintobor in 10,000 bolts of Pure Evil Energy, causing him to transform into the evil Dr. Robotnik, who chases off Sonic and immediately gets to work building an army of robots to take over the world and harness the power of the Chaos Emeralds for his own means.

The rest of the comic is spent on Sonic partaking in loose adaptations of the levels from the games to try and stop Robotnik, as well as saving Porker Lewis in the end (albeit losing a Chaos Emerald to Dr. Robotnik in the process) and the comic telling the readers to go buy the game to see what happens next.

The comic was initially meant to be the canon backstory in some form or another for the western branch of the Sonic the Hedgehog series, per word of the original

US series bible, distinguishing it from the storyline of the series Japanese branch. However, none of this backstory was ever brought up or acknowledged in any of the video games (understandable, since Sonic Team had no involvement with Sega of America's western localization of Sonic), and it is no longer considered canon (if it ever was in the first place) due to Sonic Adventure permanently merging the Japanese storyline of the Sonic games with that of the western Sonic games. It did provide the backbone for Fleetway's Sonic the Comic, which borrowed the same origin story (and curiously did an adaptation of Sonic Adventure without nullifying any of the previous continuity).

No relation to Sonic the Hedgehog (Archie Comics), which has a completely different backstory and continuity, despite also being (or rather, was) set on Mobius.

You can find the comic in question in its entirety here.

It was included in some older early 90's comic books, and was also included in the october 1991 issue of Electronic Gaming Monthly, Superman #62, issue #8 of Sega Visions, Disney Adventures Vol. 2 No. 1 (the latter in a heavily abridged form that chopped out the entire Kintobor to Robotnik part) and others. Predictably, it was also given away as a standalone promotional issue.

Compare to the Japan only, three volume tie in manga, Sonic the Hedgehog Story Comic, which likewise provides a little backstory to Sonic before the main game (and are unrelated to the other Sonic manga series published there, which also had its own interpretation of the original games backstory drawn by the mangas artists, albeit as a tie-in to Sonic the Hedgehog 2 instead). Obviously, the former manga ignores the backstory established by the western continuity and sticks more closely to the source material, while the other manga plays fast and loose with it.

Tropes Related To The Comic: