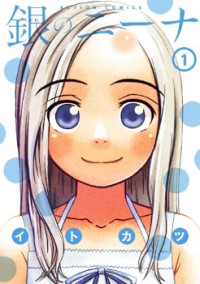 I lost my job about a year ago. After that, I couldn't find another job. My savings were getting too low for my own comfort, so I decided to return to my family home. (...) There was a little foreign girl I hadn't seen before standing there...
—Chapter 1, "A Girl Filled With Hopes and Dreams"

Silver Nina (Shirogane no Nina) is a Slice of Life / Iyashikei manga series by Itokatsu.

28 year-old Shimazaki Shutaro recently lost his job in Tokyo and sees himself forced to return to his family home in the countryside village of Tsumagoi, Kita-Karuizawa, Gunma Prefecture. When he enters his parents' house, he is surprised to find out that a young silver-haired girl has been living there too. The girl happens to be his Fenno-Japanese niece Nina, whom he hasn't seen since she was a baby, sent by his older sister Yuko (who lives abroad) to live in Japan. Now, Shutaro tries to find a new purpose in life while bonding and taking care of his niece.

The series was serialized in the seinen magazine Manga Action published by Futabasha from April 2012 to August 2019 for 133 chapters, with two extra chapters subsequently published in September that year. The manga was licensed by Crunchyroll in 2014 and can be read here