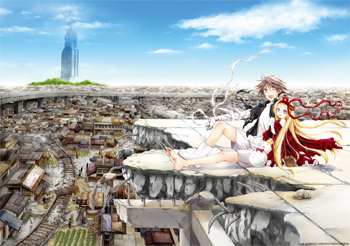 "If you can smile it off, you'll always manage somehow!"
— Takeru Shakudou
Advertisement:

Two years ago, Tokyo was supposedly hit by meteors, rendering it an island isolated from the rest of the world, receiving help from only the Governor Kuroyuki. However, their saviour soon revealed herself to be a dictator, and any attempts to defy her now are pointless, as she wields an army of tekigousha—people who possess right arms with mysterious abilities.

One day, Takeru Shakudou awakens, with no memories of the past two years and suddenly discovering his power as a tekigousha. Quickly discovering the cruelty of Kuroyuki's reign, he vows to take her down and restore happiness to the people, no matter how hard he has to fight.

Snow White and Seven Dwarfs (Shirayukihime to 7-nin no Shuujin) is a manga by Kuroko Yabuguchi and serialized by Weekly Young Jump, though its title can also be read as Snow White and the Seven Prisoners. It takes place in a post-apocalyptic Japan, and is very loosely based off of the original tale of Snow White.