Finland (Finnish: Suomi, Swedish: Finland), officially known as the Republic of Finland (Finnish: Suomen tasavalta, Swedish: Republiken Finland), is a large, mostly empty Northern European country squeezed between Sweden and Russia, with its northern border being shared with Norway. Though ethnically distinct from both, it has generally been ruled by one or the other for most of its history. After centuries of Swedish domination (leading to Finland still having a sizable Swedish-speaking minority), it was handed over to Russia in 1809 and remained under the Tsar until the revolutions of 1917 gave it the chance to break free.

Finland was neutral in World War II for the first three months, ending with the Soviet invasion late November 1939. In one of the less likely outcomes of recent memory, the Finnish army (outnumbered 4 to 1 in men and 200 to 1 in tanks) handed the Red Army their asses on a plate and preserved Finnish independence, though the Soviets gained the port city of Vyborg and much of the Finnish region of Karelia. Better people than tropers have tried to determine which side actually won. It all started in 1939, when Joseph Stalin decided to conquer Finland, partially to use it as a buffer against Adolf Hitler's army. This led to the brief but brutal Winter War, which the small country technically did not win, despite killing way more of the invading soldiers than losing its own. The stalemate did not result in permanent peace, and Finland attacked the USSR in 1941 with German support (arguably in self-defense), becoming the only democratic state technically on the Axis side. Once again, neither side won, but Finland retained its independence. After making peace with the Soviets, the country had (at Moscow's insistence) to expel the Germans from its soil by force, resulting in additional destruction. The Soviets ended up keeping their territorial gains. This long sequence of events has given wargame designers headaches to this day.

Finland was the first country to paint swastikas on its aircraft, though in their case it was the personal insignia of the Swedish count who paid to set the Air Force up, and pre-dates the Nazi use of the symbol. The Finnish swastika was blue rather than black and rotated 45 degrees relative to the Nazi version. It must have looked odd to see British-supplied Hurricane fighters and American Brewsters with swastikas painted on the side, though.

War reparations to the Soviet Union required heavy industry and turned out to jump-start Finland's development from rural backwoods to advanced, well-to-do backwoods. The country remained neutral throughout the Cold War through concessions ("Finlandization", including buying MiG-21s and other weapons from the USSR) and extremely careful diplomacy. Afterwards it joined The European Union in 1995 and adopted the Euro in 2002.

Modern Finland is a wealthy and stable nation. There's a high tax rate and a lot of vaguely Minnesotan, rather than Alaskan, nature. The country is probably best known as an exporter of mobile phones (Nokia is a Finnish firm* though the company no longer makes phones; current Nokia phones are sold by another Finnish outfit, HMD Global, which licenses the Nokia name), heavy metal bands, and racing drivers. Finns successful in any form of racing, be it on skis, wheels or feet, are invariably known as "Flying Finns."

Since 2019, the country’s Prime Minister is Sanna Marin of the Social Democratic Party. At only 34 upon taking office, she’s the country’s youngest ever PM and the second youngest head of government in the world. note Austrian Chancellor Sebastian Kurtz is nine months younger than she is.

For some unknown reason, Finnish overrepresentation is almost a Running Gag amongst online communities. Finns have a large presence on this wiki, possibly the largest from a non-English-speaking nation. Finland was one of the first countries on adopting the Internet, and many IT innovations, such as social media and mobile technology, originate in Finland. In addition, one of the two original developers of MySQL, itself based in Sweden before being acquired by Sun (and eventually Oracle), is from Helsinki.

Finland is the world's best country chosen by the Newsweek. (Take that, Sweden!) In fact, due to its awesome school system and Newsweek's dodgy scoring system Finland got 102 points for education — out of 100.

The Finnish language is notoriously alien-looking to speakers of Indo-European languages (such as English and Swedish)note In the context of all the languages in the world, however, it isn't particularly strange; it is part of the completely unrelated Uralic group (including the closely related Estonian, the very distantly related Hungarian, the Sámi languages spoken in Lapland, and a number of minority languages in Russianote Which means it might be easier for a neighbour Swedish to learn Hindi than learn Finnish). It was this strangeness that attracted J. R. R. Tolkien to the language, and he used Finnish as the basis for his invented Elvish languages (specifically Quenya) — though he later changed the spelling to a more Latinate form that would look more appealing to English eyes. That said, Finnish is actually spelled very much like classical Latin, probably because Finnish spelling was deliberately created a relatively short time ago. After thousands of years of sharing land with both Slavic and Germanic tribes, expect a lot of borrowings to crop up, some ancient and unchanged to this day. 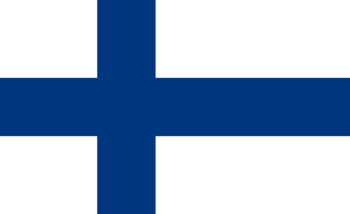 The flag displays a blue cross on a white field, symbolizing Christianity. The flag itself is loosely based on the Dannebrog (flag of Denmark), in which one axis is aligned towards the hoist side. The tinctures are those of the Russian naval ensign (dark blue saltire on white). As a state flag it adds the national coat-of-arms — a red field containing a golden lion with an armored right forearm holding a sword and trampling on a saber with its hindpaws. (In heraldic language Gules, a crowned lion Or rampant armed and langued Argent holding a sword Proper on armoured dexter forepaw Argent trampling a sabre Proper semy of nine roses Argent)
Coat of arms of Finland 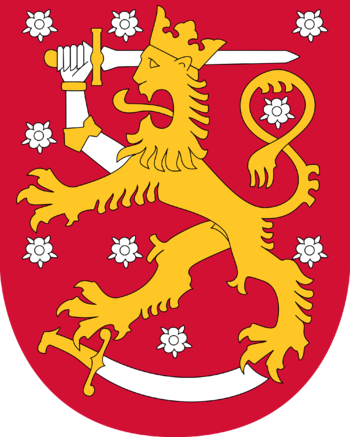