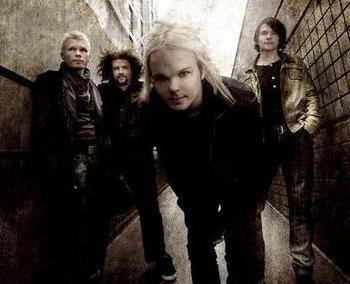 Aki Hakala, Pauli Rantasalmi, Lauri Ylönen, and Eero Heinonen.
So close, so far, I'm lost in time
Ready to follow a sign
If there was only a sign
— "Justify"
Advertisement:

The Rasmus is a Finnish band formed by four students in 1994, at first simply titled Rasmus (the name actually comes from the phrase "thrash mosh", even though Rasmus is a common forename in Nordic countries, and Rasmussen a common surname). Generally described as Rock or Alternative Rock, their music can also come under various sub genres of metal, including Gothic, Symphonic, and Funk. The group's work can be divided into two main time periods, one of which is generally Pop and Funk-oriented (1994-1998), while the other (2001-Present) leans towards Metal and Gothic music. Their name change came in accordance with their stylistic shift; their first release under their revised title The Rasmus was their 2001 album Into.

While achieving moderate success with singles such as: "F-F-F-Falling," the band is undoubtedly most recognizable for "In the Shadows," which brought them international success, and was their only major hit outside of Finland. Other notable singles include: "Liquid," "Chill," "Guilty," "No Fear," "Living in a World Without You," and most recently "I'm a Mess."

Lauri is perhaps most famous for his appearance on two Apocalyptica tracks released in 2005, "Life Burns" and "Bittersweet," the latter being a duet with fellow Finn Ville Valo of HIM. For many, these collaborations are Awesome Music. In return, Apocalyptica provided instrumentation on the song "Dead Promises."

The band continue to tour, and have committed fan bases in many regions. As of 2012 they have released eight studio albums. Lauri also diverged into the electropop genre with his 2011 solo album titled New World. And the Mexicans love them.

In 2022, they made a career comeback by winning the right to represent Finland in the Eurovision Song Contest with new song ‘’Jezebel’’ earning a win in the nation’s selection show UMK.