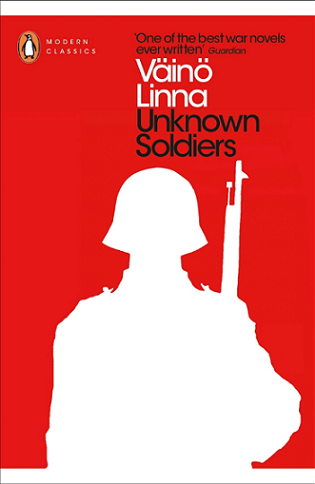 The Unknown Soldier is a novel by Finnish author Väinö Linna. It is a war novel set during the Second World War on the Finnish-Soviet front between 1941 to 1944 (known as the Continuation War in Finnish historiography). The story describes the tour of duty of a Finnish machine gun company and its men. The main protagonists are the men of rank and file and lower-ranking officers, who are all conscripts or reservists.
Advertisement:

(Not to be confused with the DC Comics character of the same name.)

The novel is based on Linna's own experiences in the war before he was promoted to Sergeant and transferred to recruit training. The book is written in a very realistic style and is considered one of the best war novels ever written. Many of the protagonist personae are loosely based on real life persons from Linna's patchwork regiment where many soldiers came from different regions of Finland. The Unknown Soldier is considered a deep analysis of the psychology of soldiers and the effects of war on people as well as the makings of a good soldier.

The book is written in extremely realistic style. Battle scenes are not sanitized, and the traits, personalities and psychologies of the soldiers are well portrayed. Because of its utter naturalism, it is considered heavily an anti-war novel rather than a heroic epic.

During its writing, the Unknown Soldier saw extensive Executive Meddling by the publisher WSOY. The vulgarity of Linna's writing as well as many of the negative remarks by the characters of the book towards Finnish military high command, religion, communism, Soviet Union and the war itself were considered too Politically Incorrect for 1950s Finland and subsequently significant amount of these comments were deleted from the final release of the book by the publisher without them consulting with Linna about it. On the other hand the publisher also removed extensive Author Filibusters by the narrator that the publisher and many readers alike felt ruined the flow of the book and were oftentimes Anvilicious in nature. An uncut version of Linna's writings was published in 2000 under the title Sotaromaani (A War Novel). Whether these last minute changes ultimately improved the work or not is still hotly debated by critics and audiences alike.

The book has been translated into many languages; however the original English translation is very poorly translated. It not only omits some scenes but even changes some character's personalities entirely. A new English translation has been made in 2015 by Penguin Classics under the title Unknown Soldiers. It is highly recommended reading.

The novel has been made into a film several times. A black and white movie was made by Edvin Laine in 1955, and a color one by Rauni Mollberg in 1985; both films had good success. A third adaptation was released in October 27th, 2017, with a 7 million euro budget - the biggest and most expensive Finnish movie to date - with its premiere being part of the nationwide celebrations of the 100th year of Finnish independence.

Compare with the works of James Jones for roughly similar American works about World War II.