Call That a Formation? 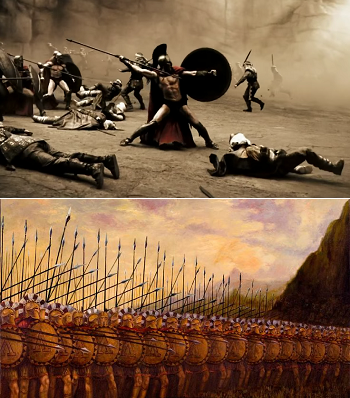 Sure he's completely exposed, but he has a name.
Advertisement:

In ancient warfare, or indeed modern warfare before the advent of accurate rifles, armies generally kept in some kind of formation. Well, some armies, anyway. The Celtic peoples of Roman and Greek times were exceptions to this rule (even then, there is evidence that the Celtic peoples had at least some minor sense of organization for battle purposes). But armies like the Romans, Greeks, generally any spearmen on any battlefield, and any modern European army, all stayed as a block of troops and worked together in a distinct formation.

There are good reasons for this. For organized armies like Greek phalanx or Roman legionaries, the equipment works best (if at all) if used in specific formation. Even in less-organized armies, most people carried some kind of shield and would probably have stuck to their ranks launching projectiles and bashing against enemy shields at close range. Running headlong into battle with no care about who is next to you is thought to have been rare because the odds of receiving a fatal injury doing so are high. There is no trauma care and there are no antibiotics.

That's Real Life. Fiction is different. This trope describes situations where you see armies fighting out of formation which should be in a distinct formation.

That said, some things you'd expect to be unrealistic, like having soldiers wielding different weapons from each other in the same group of soldiers, aren't necessarily wrong; towards the end of Medieval warfare, knights generally fought with the support of several warriors of lower status armed with weapons, and fought in smaller units. And as soldiers were often required to arm themselves, those of lower status would often have to bring whatever they could to hit the enemy with. The warfare during The Wars of the Roses is an example. Generally though, warriors of different social standings fought separately from their colleagues.

Even cavalry, who you wouldn't think of as having a formation, can fall victim to this. For example, Alexander's cavalry would have often charged home in the wedge formation.

A big exception is once battle is joined. The most disciplined forces, like Roman and Greek soldiers, would try to maintain formation under all circumstances, and pike and spear walls would likewise attempt to maintain the integrity of their formation. But war is war, and at some point the formation is going to dissolve or at least weaken. So if there's heavy melee fighting going on, it's acceptable to see soldiers duelling it out as individuals. Expect to see historians face-palming if phalangites are charging in with swords mid-melee, however. Same goes for Roman legionaries willingly coming out of their famous shield wall.

A subtrope of Hollywood Tactics.