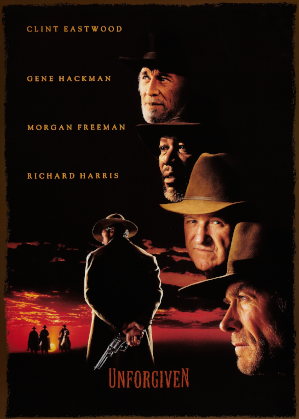 "It's a hell of a thing, killing a man. You take away all he's got... and all he's ever gonna have."
—Will Munny
Advertisement:

A Western from 1992, written by David Webb Peoples, produced, directed by and starring Clint Eastwood.

In the town of Big Whiskey, normal people are trying to lead quiet lives. Cowboys are trying to make a living. Sheriff Little Bill Daggett (Gene Hackman) is trying to build a house and keep a heavy-handed order. The girls of the town's brothel are just trying to get by. But when one of a pair of cowboys cuts up one of the brothel's girls, who goes by the name of Delilah Fitzgerald (Anna Levine), the prostitutes are not satisfied with Little Bill's justice and put out a $1,000 bountynote Adjusted for inflation that would be approximately the equivalent of over $29,000 in 2021 on the heads of both cowboys, Quick Mike and Davey Bunting.

William Munny (Eastwood) is a Retired Gunfighter. Formerly a notorious cold-blooded killer, Munny was seemingly reformed by his late wife Claudia, who convinced him to give up his murderous ways and settle down as an honest farmer, living peacefully with their two children. However, farming is hard and his family are in financial difficulties, so Munny is drawn back into a life of killing when Gunfighter Wannabe the Schofield Kid (Jaimz Woolvett) offers to split the reward on the bounty. Together with his old partner Ned Logan (Morgan Freeman), Munny and the Kid set off on one last job, and in the process run afoul of Little Bill. In the ensuing hostilities, the ruthless demon that laid dormant within Munny is unleashed with a vengeance.

The film has gone on to be considered one of the greatest westerns ever made. It won four Academy Awards (and was nominated for five others), garnering Best Picture and Best Director for Clint Eastwood, Best Supporting Actor for Gene Hackman and Best Film Editing for editor Joel Cox.

A Japanese remake starring Ken Watanabe was made in 2013.

Not to be confused with the older western film The Unforgiven, which tells another story entirely.