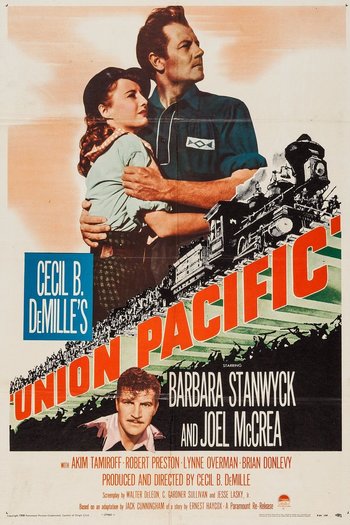 A corrupt businessman named Barrows (Henry Kolker) sees a means to profit off of this plan. While pretending to invest in the Union Pacific he secretly backs its rival, the Central Pacific. He then hires a slimy gambler, Sid Campeau (Brian Donlevy), to basically bring along with the railhead a portable Red Light District filled with saloons and prostitutes and the like. Sid's job is to retard progress on the railroad by distracting the workers with his liquor and whores, and to use more direct means if necessary. This will allow the Central Pacific to make more progress and to reach the vital junction of Ogden, Utah before the Union Pacific does.

Enter "chief troubleshooter" Jeff Butler (McCrea). Jeff is hired by the Union Pacific to basically be railroad law enforcement, maintaining order to keep the workers from being distracted and to facilitate the progress of the railroad. He immediately runs into conflict with Campeau. This conflict is complicated by the presence of Mollie Monahan (Stanwyck), the engineer's vivacious daughter. Molly has sparks with Jeff but has another suitor in the person of Dick Allen (Robert Preston), Jeff's old war buddy and one of Sid Campeau's mooks.

A young Anthony Quinn has a small part as one of Campeau's goons.