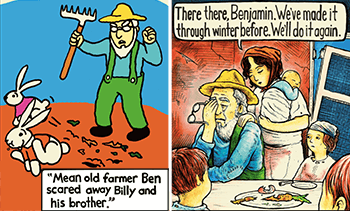 "Seeing weaklings who, despite all their faults, show signs of promise and try their best makes you want to cheer them on, it's only natural!"
— Kaname Chidori, Full Metal Panic? Fumoffu
Advertisement:

Just like being on TV makes you 10 pounds heavier, the camera also makes you far more sympathetic. The same story, told from two different points of view, can flip the roles of hero and misguided antagonist simply by switching perspective.

Fits a particular kind of story that has more room for moral interpretation, without stark moral contrasts that instantly discredit the other side. If it does have clear White Hats and Black Hats, the best the bad guy can expect is a Cynicism Catalyst, Kick the Dog, Freudian Excuse or Start of Darkness detailing how they fell from grace. The end result is Protagonist-Centered Morality where because we sympathize the most with the protagonist, we will also see their choices as morally correct.

Compare Villain Protagonist, Villain Episode and P.O.V. Sequel. Contrast with In Another Man's Shoes, Only One, "Rashomon"-Style. Informed Wrongness may be an inversion. See also A Lighter Shade of Grey and Adaptational Sympathy.