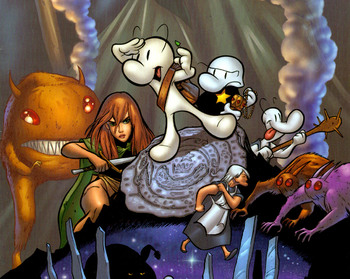 These Cartoon Creatures have found a land of High Fantasy. They don't exactly fit, do they?
"Wait, I wasn't briefed on this being Romcom!"
— Sousuke Sagara, Full Metal Panic? Fumoffu
Advertisement:

A Genre Refugee is a Stock Character from some genre who appears in a story that is in no other way part of that genre. The character is probably Wrong Genre Savvy, or may be the cause of wrong genre savviness in others. Since genres often have different tones, the character may be a Knight of Cerebus or the inverse.

Super-Trope to Outside-Genre Foe. See also Fish out of Water.