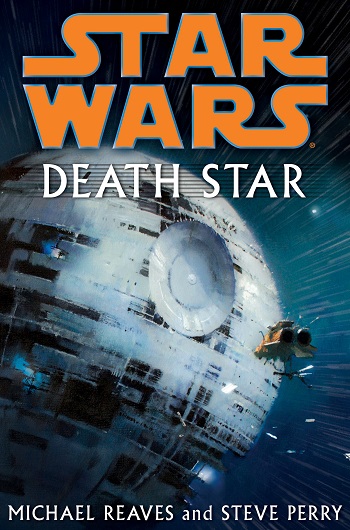 "The Death Star was a monster, no question about that. It was conceived by monsters and controlled by them. But not everyone on board was a monster."
— Teela Kaarz
Advertisement:

is a novel in the Star Wars Legends continuity, written by Michael Reaves and Steve Perry and published in 2007. Perry also wrote Shadows of the Empire. Reaves wrote a few episodes of the old Droids and Ewoks television shows, as well as Darth Maul: Shadow Hunter and the Coruscant Nights trilogy. Prior to Death Star, the two authors worked together to write the MedStar books, Battle Surgeons and Jedi Healer. They re-use characters and details from their previous works with some regularity.

The novel follows the lives of a selection of characters who end up working on the first Death Star late in its completion and afterward, including their perspective on the events of A New Hope. They include Darth Vader, Grand Moff Tarkin, Admiral Motti, a surgeon, a Force-sensitive stormtrooper, a bartender, a librarian, a bouncer, a TIE pilot, a wrongly accused convict, a political prisoner who was an architect, and the Death Star's lead gunner.

Interestingly, there is no overall villain of the book. The Rebellion is certainly out there, weighing on people's minds, but aside from the minor role that Leia Organa plays, none of them are named or given much notoriety, much less become a viewpoint character. Some characters oppose each other—Motti does not like Vader, for instance—but until the end most of them are at least somewhat civil with each other. They're all more or less on the same side, after all.