Literature / Soon I Will Be Invincible 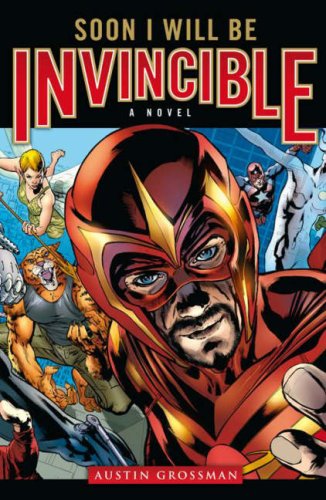 "I saw the misadjusted dials and the whirling gauges and the bubbling green fluid and the electricity arcing around, and a story laid out for me... I was going to declare war on the world, and I was going to lose."
— Doctor Impossible
Advertisement:

A novel by Austin Grossman about a world where superheroes exist and have been around since World War II. The setting is an Affectionate Parody of both the Marvel Universe and The DCU, and like these two is decidedly in the realm of the Fantasy Kitchen Sink, with everything from magicians to aliens. Most of the characters are Captains Ersatz or pastiches of superheroes and superhero tropes.

The story is told in alternating viewpoints between Fatale, a new recruit to Avengers/Justice League analogue the Champions, and Doctor Impossible, a supervillain who has fallen on hard times and is currently in jail for the 12th time. The great hero CoreFire is missing, and his Arch-Nemesis Doctor Impossible has escaped from prison. Coincidence? ...well, actually, yes, much to Impossible's annoyance. No matter, he has his own plans; it's just going to be harder to implement them now that the rest of the superhero world is trying to rescue the hero he doesn't have hostage.

While the world is fairly insane, most of the characters act like regular people do, making them in effect Straight Men to the bizarre milieu they inhabit.