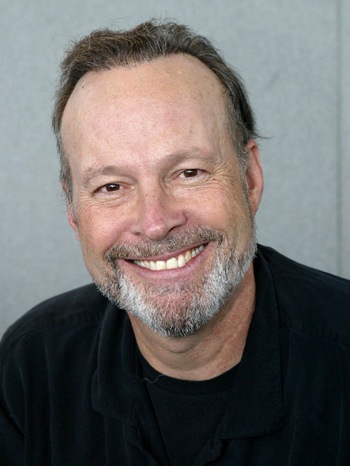 "I've been blessed with some lovely scripts and a character that people could truly identify with. It's one of those surprises in life that makes you think, 'God was smiling on me that particular day.'"
Advertisement:

William Dwight Schultz (born November 24, 1947 in Baltimore, Maryland) is an American actor best known for his roles on television as Captain H.M. Murdock from The A-Team and Lieutenant Reg Barclay from Star Trek: The Next Generation.

Prior to The A-Team Schultz was primarily a theatre actor, appearing in plays opposite Maggie Smith, Glenn Close, and Charlton Heston. In 1989 he starred with Paul Newman in Fat Man and Little Boy. He is currently known for a variety of voice work in animation such as Ben 10 and Chowder and video games such as Dragon Age, The Elder Scrolls V: Skyrim, Mass Effect and The Darkness. He also regularly fills in for various radio shows including Rusty Humphries, Michael Savage and Jerry Doyle. Since 1983, he has been happily married to Wendy Fulton.

and The other Wiki

have more detailed information on his career.