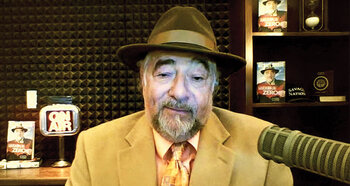 Michael Alan Weiner, better known as Michael Savage, is the conservative nationalist host of The Savage Nation, a nationally-syndicated talk show that airs throughout the United States on Talk Radio Network. The Savage Nation has an audience of 8 to 10 million listeners on 400 stations across the United States, making it the third-most-listened-to talk radio shownote after Rush Limbaugh and Sean Hannity in the country.

He outspokenly opposes illegal immigration to the United States, supports the English-only movement, and argues that liberalism and progressivism are not only degrading American culture, but are in fact symptoms of a greater mental disorder. (One can imagine how well that goes over with his critics, who have characterized him as "fostering extremism/hatred.")

Although his radio delivery is usually characterized as confrontational and politically-themed, some of his show involves ruminating on topics such as medicine, nutrition, music, literature, history, theology, philosophy, sports, culture, and personal anecdotes.

Admittedly he looks a little like the latter, but not to be confused with Macho Man Randy Savage or Vandal Savage. Not to be confused with a similarly named former Liberal MP, and current Mayor of Halifax, in Nova Scotia, Canada or the Great Depression-era Prime Minister of New Zealand. For one, they are both to the left of him (not that this man makes it too difficult to be to the left of him).

Please refrain from doing Take Thats on this article