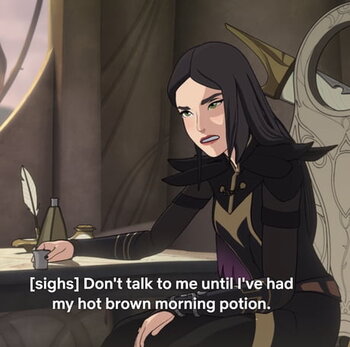 "[Her son] hung over her shoulder and brought her continual mugs of strong black coffee. This beverage began to appear in the books, too. The mutineer humans drank gav, while their law-abiding enemies quaffed chvi. Spacer aliens staggered from their nav-couches to gulp down kivay; and the mystics of Meld used xfy to induce an altered state of consciousness — although this was not generally spotted as being the same substance. And it was all immensely popular."
— "Nad and Dan adn Quaffy", Diana Wynne Jones
Advertisement:

Every single Speculative Fiction setting comes with a hot, mildly stimulant beverage that can take the place of coffee, and more often than not has a name that sounds very much like "coffee". Apparently coffee itself is too mundane to talk about; alternately, authors of Medieval European Fantasy may want to avoid it because it wasn't common in Europe until the 17th century. Sometimes authors justify it by saying that coffee exists in-universe, but the beverage in question isn't really coffee, or is a specific form of coffee that everyone inexplicably prefers to all other forms.

Can be considered a Sub-Trope of Most Writers Are Writers: anyone who's ever struggled with Writer's Block will feel they owe a debt of gratitude to the drink, and a brief cameo is the least they could do. Nick Lowe, of "The Well-Tempered Plot-Device" fame, has suggested that this is a vicious cycle: you have writer's block, you drink coffee, you start thinking about coffee, and you mistake this for your writer's block clearing up.

Compare Call a Rabbit a "Smeerp", the supertrope for things other than coffee. Also see this

essay by Jo Walton (which, incidentally, links back to this wiki) and Klatchian Coffee as the drinks that fall into this trope can also overlap with being an Uncoffee.

See also All Beer Is Ale, Bad to the Last Drop, and Drunk on Milk.