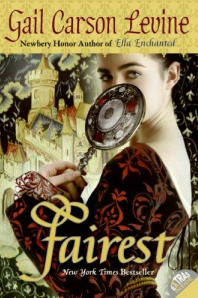 Fairest, by Gail Carson Levine, is a meta-sequel to Levine's Ella Enchanted, set in the same world and with the sister of Ella's best friend Areida as the main character. Fairest is a warped Snow White, set in the singing country of Ayortha. Aza is an adopted, abnormal-looking child in a country obsessed with beauty. Her parents are innkeepers, and since Aza is expected to do her part in taking care of the inn, she often falls victim to rude staring and remarks by the guests — except for the gnomes, one of which becomes her close friend. She has a singing ability that can be done by no one else, called 'illusing', which is actually a voice-throwing skill made magical in a way. Through an interesting course of events, she becomes the companion of the Duchess of Olixio one night thanks to her cat, and makes her way to the castle for the king's wedding.

The catch? 40-something-year-old King Oscaro has married a 19-year-old Ivi of Kyrria (Ella's country), a commoner who people distrust at first for that very reason. However, her radiant beauty eventually wins over the court. Ivi discovers the shy, withdrawn Aza while she illuses in private, and forces her to use the talent to provide a singing voice for Ivi in public appearances. (Ayortha has a tradition of public Sings, and the rulers are expected to have the best singing voices of all; Ivi's singing voice isn't very good, and she doesn't want anyone to find out.) When the king falls ill, Ivi uproots the kingdom with Aza in tow with deception dragging at her every day. Aza's story winds around falling in love, getting over her weakness, and learning to accept herself for who she is.