Literature / A Fable of Tonight 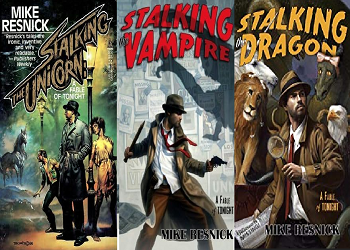 A Fable of Tonight is a Fantastic Noir series by author Mike Resnick. The first novel in the series, Stalking the Unicorn was published in 1987 as part of the fantasy noir boom that also launched the long-running Garrett, P.I. series and Who Censored Roger Rabbit?.
Advertisement:

Private Detective John Justin Mallory is hired by an elf to find a missing unicorn is an alternate version of Manhattan populated by all sorts of magical creatures and ends up running afoul of The Grundy, that world's ultimate crime boss (who also happens to be a demon). In the end, he ends up sacrificing his chance to go home in order to keep the Grundy from entering our world and sets up shop in a world where he is often literally the Only Sane Man.

There are also numerous short stories, several of which will be collected and published in the upcoming volume Stalking the Zombie.

A Fable of Tonight has examples of: