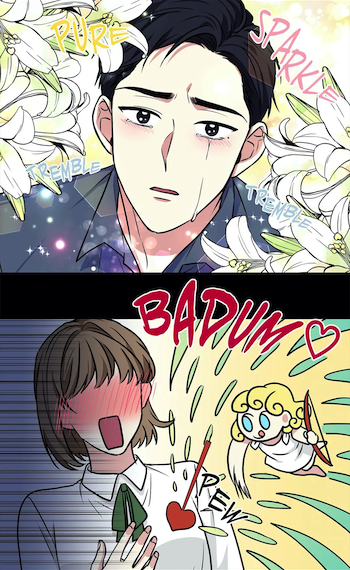 "Her tears were none of those unpleasant tears which spoil the face; she had a most touching grace in weeping, and her sorrow was a most beautiful thing to witness."
— Octave about Hyacinthe, The Schemes of Scapin
Advertisement:

In real life, genuine tears are difficult to make attractive: your skin might get splotchy, you have fluids all over, and your speech starts getting messed up. Not so much in fictionland, where someone crying is extolled as the peak of graceful, sad beauty. Characters blessed with Beautiful Tears are cuter or even more attractive when they cry: their skin flushes in just the right places, their eyes shimmer like jewels, their tears cascade in rivers down their cheeks, and their sobs are soft and gentle.

Usually, this is used as evidence for a character's good looks. Any poor soul witnessing their crying will find it adorable: a hated rival might soften their attitude, while a Love Interest will fall deeper in love. Might overlap with Humanizing Tears if the crying is also used to make a cold or harsh character more sympathetic.

Manipulative characters who are aware of their cute looks (eg. the Bitch in Sheep's Clothing and The Fake Cutie) might utilize Crocodile Tears to look beautiful and get their way. See also Wounded Gazelle Gambit.

Compare Single Tear and Sparkling Stream of Tears, unrealistic yet romantic depictions of crying; Beautiful Dreamer, where someone looks good while doing another awkward bodily function (sleeping); and You're Cute When You're Angry, when someone is considered good-looking when upset. May be compounded with Puppy-Dog Eyes or a What Beautiful Eyes! reaction. Contrast Inelegant Blubbering (when someone messily cries) and When She Smiles (when someone is considered more attractive when they're smiling).