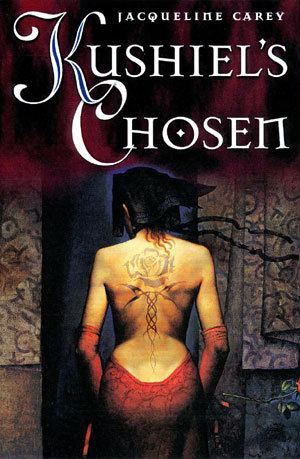 "Love as thou wilt."
Advertisement:

Kushiel's Legacy is widely lauded by reviewers for having complex societies, likable characters, and a continuous onslaught of politics and intrigue which blend seamlessly with the sex.

The books are split up into 3 trilogies, each with a different protagonist.

open/close all folders
Phèdre's trilogy
The first trilogy follows the exploits of Phèdre, a woman with a red mote in her eye which marks her as an anguissette, one who experiences pain as pleasure. This talent means she draws a high price, as prostitution is a highly valued and respected profession in her home country. Added to this, she is trained in espionage, escape, and other things by her bondholder, with intent to use her as a weapon to stabilize the realm. Over the span of three books, Phèdre goes from girl to adult, and winds up deeply involved in the politics of the realm and the divine, thanks in part to her... unique talents, both as courtesan and spy. Much of the story focuses on her sexual encounters, both consensual and at times very non-consensual.
Advertisement:
Imriel's trilogy
The second trilogy follows Phèdre's adopted son, Imriel who happens to be the biological son of one of the realm's most infamous traitors. The books follow his coming of age, and his struggle to live up to his adoptive parents while putting aside the reputation in his blood.
Moirin's trilogy
The third trilogy takes place a century after the second trilogy ends, and follows the adventures of the druid Moirin from the land of Alba. A descendant of the Maghuin Dhonn from the second trilogy, Moirin must learn to deal with the consequences her ancestor's actions foisted on her people, master her magical powers, and learn about her half-D'Angeline heritage.
Short stories
In 2010, the short story "You, and You Alone," part of the Songs of Love and Death anthology, told Phèdre's mentor Anafiel's backstory.
Advertisement: