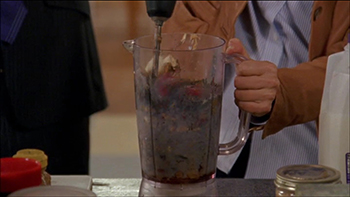 "How do you like your drillshake, Randy? Oily, or non-oily?"
"Will it blend? That is the question."
— Tom Dickson, Will It Blend?
Advertisement:

At some point in your favorite movie or TV show, one of the characters decides to make a smoothie, using all the usual ingredients. Into the blender goes blueberries, fruit juice, a banana, sausage? A chocolate bar with the wrapper on? A pen?

This trope occurs when unusual ingredients, often including some non-food items, are added to a blender. May occur after a character promises a "special shake", or some similar description. Often, the more typical items are added first, while the more "unconventional" items are saved for later.

May sometimes be an example of a Lethal Chef or Cordon Bleugh Chef. A Hideous Hangover Cure may be this. Despite the name, the trope applies to any sort of mixture that gets blended in a blender.