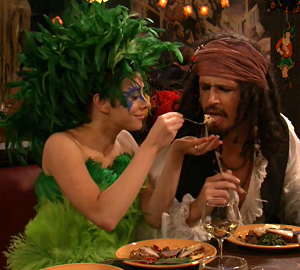 A use of Through His Stomach, with an excuse to get physically close to the Love Interest.

One person puts food into another's mouth as a romantic gesture. Very frequently, the feeding character will say a variant of "Say 'AAAH'" to the one that is being fed. The sensual aspects of the feeding usually get a lot of emphasis: doing it slowly, with a hand cupped under the other person's chin, maybe letting a fingertip linger in the recipient's mouth... you get the idea.

Often an action of Sickeningly Sweethearts. It's also part of some wedding traditions, like the newlyweds feeding each other soup or their wedding cake.

Not to be confused with Strangled by the Red String, where the audience feels like they're being forcefully spoonfed a romance.