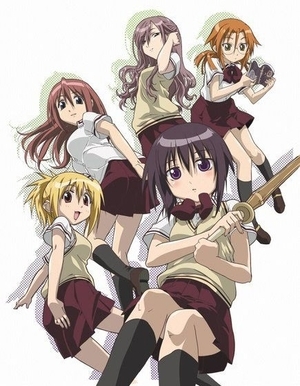 "Some fight for honor. They fight for sushi."
Advertisement:

Note: This is not a trope about the shinai, a bamboo practice sword used in Kendo practice (See Nerf Arm or Wooden Katanas Are Even Better for that). You will, however see quite a few of them in this series.

Bamboo Blade is a manga written by Masahiro Totsuka and illustrated by Aguri Igarashi, which was serialized in the seinen magazine Young Gangan from 2004 to 2010 and compiled into 14 volumes. A 26-episode anime adaptation aired from 2007 to 2008.

Kendo instructor Toraji "Kojirou" Ishida was down on his luck. Stuck in Perpetual Poverty, he could barely make ends meet. Then there was a ray of hope. If he could assemble a team of female kendo students to defeat his old friend's team, he'd get free food for a year. Now he just has to find the team. Find it he does, in the form of Tamaki, a young prodigy. The rest of the team is equally eccentric. So begins Bamboo Blade, a surprisingly well-done kendo anime mixed with Day in the Life moments to create something greatly entertaining. The characters sell the show.