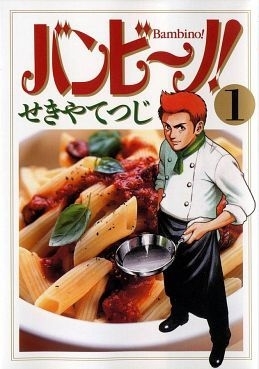 Shogo Ban is a college student who loves to cook and works as a part-time chef in a small Italian restaurant in his hometown of Fukuoka, with the hopes of being able to open his own restaurant one day. But when his boss sent him to work in Trattoria Baccanale, a top-class restaurant in Tokyo, Ban soon discovers that being a professional chef is not as easy as he thought. Even so, Ban is determined to survive the harsh work environment of Baccanale and eventually decided to drop out of college and work there full time to pursue his dreams.

Bambino! is a 14 volume Seinen cooking manga written and illustrated by Sekiya Tetsuji that focuses heavily on Slice of Life drama. It is completed in 2009 and has an on-going sequel, Bambino! Secondo, which takes place after the opening of Trattoria Legare (Baccanale's second store). Also it has a Live-Action Drama series in 2007 starring Jun Matsumoto as Shogo Ban (his group also made the opening for the series).