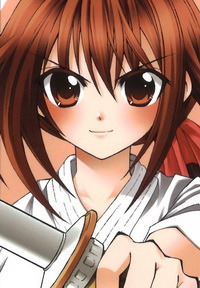 Bamboo Blade B is a manga series by Masahiro Totsuka and illustrated by Studio Nekonote Saki Azumi and 6 other assistant.. It was serialized in Square Enix Monthly Shounen Gangan from December 2008 to December 2013 and has been collected in twelve tankōbon volumes in January 2014.

Yuu is an extremely tall girl who just entered middle school. Because of her height everyone is trying to recruit her into their sports club, even though she is terrible at them. Her childhood friend, Ken-chan, who is still in Elementary school, keeps on telling her to join the Kendo club. But she hates Kendo, because she never had a single victory against him. She and her best friend, Nana, join the Home Economics club, but somehow get herself involved in a team match to decide who will be the Kendo club advisor.

It is a Spinoff of Bamboo Blade which takes place in the same timeline but with all-new characters. The "B" in the title refers to "BOY" (shounen) because the characters are mostly in middle school age and it was serialized in a magazine aimed for shounen demographicnote From the author's afterword in volume 9. It also has a sequel Spinoff, Bamboo Blade C.