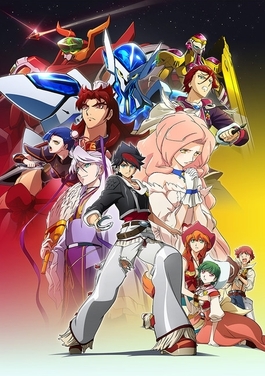 Lingalind, a world surrounded by a wall.
The wall enshrouds the land, protecting, nurturing, sustaining.
The wall is God. That is the basis of Lingalind.
— Opening Narration for each episode
Advertisement:

Lingalind, a continent completely surrounded by a massive wall. The land is dominated by two nations: The Lutoh Republic, which values intelligence, and The Great Rekka Empire, which values honor. These two nations are in constant conflict with each other over obtaining Rakuho - capsules that are sent from an unknown location once per month and land in predetermined regions of Lingalind, containing provisions and weapons that the people of Lingalind consider gifts from the wall.

The most valued of these treasures are Bind Warpers, metallic armbands that allow one to summon and control a giant mechanical armor known as a Briheight. A Briheight's abilities are tied to one's Conviction, the thing they believe in above all else. The people of Lingalind revere the wall as a god, believing that all of existence is contained within.

One day after a Rakuho is recovered by Rekka forces, a previously unheard-of second Rakuho lands in Edger Village on the outskirts of Lingalind. Inside is an amnesiac young man whose only memory is that he is from "beyond the wall." Taking the name "Back Arrow," he seeks to journey back over the wall to restore his memory, entangling himself in the conflict between the two nations.

Back Arrow (バック・アロウ) is an original Anime series produced by Studio VOLN, directed by Gorō Taniguchi (Code Geass, Planetes, Revisions) and written by Kazuki Nakashima. The series premiered as part of the Winter 2021 Anime season and is available for streaming on Funimation.

The wall enshrouds the land, protecting, nurturing, sustaining and providing the examples of: