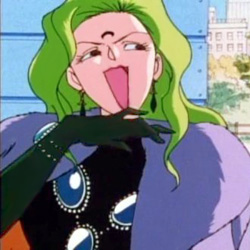 These characters are most likely to exhibit this laugh in moments of arrogance or when contemplating how they'll humiliate their enemies. They frequently will pose holding a straightened palm vertically to the side of or below their mouth, or holding a fan over their mouths. This comes from the custom that refined Japanese women don't expose their mouths while laughing.

No matter what, the Noblewoman's Laugh is almost always the mark of a bitch.

Male villains may also laugh this way, particularly if they're similarly prim or aristocratic or if they're effeminate (so expect to hear it from the Wicked Cultured man or the Sissy Villain).

There is an entire YouTube channel dedicated to this trope.

Lose to Heike Kagero, and he laughs at you.

Lose to Heike Kagero, and he laughs at you.