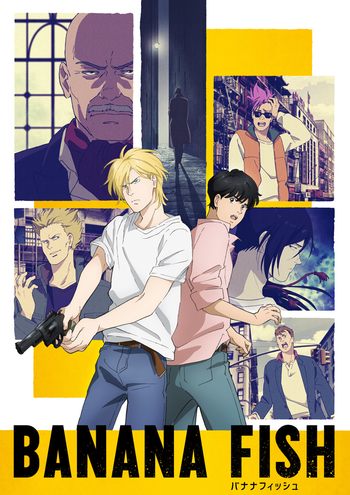 "Strength and intellect. Nerves of steel. Matchless grace and beauty. He has it all. He was to be the Prince of Darkness—that's what I groomed him for. Ash is my creation."
— Dino "Papa" Golzine

A crime/action/noir manga by Akimi Yoshida, published from 1985 to 1994 in the magazine Bessatsu Shojo Comic, Banana Fish is about teenage gang leader Ash Lynx, his fight against mafia boss Dino Golzine, his relationship with Japanese photographer Eiji Okumura, and the mysterious "banana fish" that is at the center of it all.

It later received an anime adaptation

, produced by MAPPA and directed by Hiroko Utsumi (who previously directed the first two seasons of Free!). It aired for 24 episodes, running from July 5, 2018 to December 20, 2018. The anime celebrates the 40th anniversary of Yoshida's debut as a mangaka. It was brought over internationally via Amazon.

Viz Media originally published the English version of the manga under its Shoujo Beat label. Following the anime's broadcast, they decided to issue a reprint.