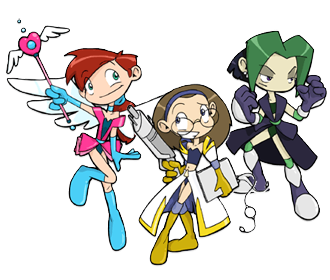 Left: The one who fires off glorious magic spells.
Center: The one who builds the best gadgets.
Right: The one who punches things real hard.
"Blossom, commander and the leader
Bubbles, she is the joy and the laughter
Buttercup, she is the toughest fighter"
—Ending theme, The Powerpuff Girls (1998)
Advertisement:

An Always Female group dynamic trope, a type of Power Trio where one is smart, one is tough, and one is conventionally pretty, popular, and/or feminine.

Often, to give "Beauty" a skill beyond her looks, she also acts as the Team Mom, The Kirk, or the mediator when the other two get into their frequent fights. She may also be the one who is socially adept and has the least qualms with going undercover and/or using her feminine wiles for the group's benefit, while "Brains" has technical skills but is socially awkward, and "Brawn" struggles with any obstacle she can't beat into submission. "Beauty" can also be the trio's financial backer by way of her own wealth or a rich daddy or (ex)husband.

Alternatively, "Beauty" could also be the least shallow of the trio. While the "Brains" often seeks those of similar or higher intellect, and the "Brawn" falling for those of more physical superiority. The "Beauty" being true to their title, would judge both inner and external appearances shrewdly. After all they aren't The Heart for nothing.

The personalities might also be what the Freudian Trio used to be described as:

Often Color-Coded for Your Convenience as the Brainy Brunette, the Fiery Redhead and the beautiful but Dumb Blonde (keeping with giving them a skill, sometimes they can also be an example of Hair of Gold, Heart of Gold). Contrast though as the Blonde, Brunette, Redhead tend to be portrayed as flaws while Beauty, Brains and Brawn are good.

See also: The Hecate Sisters, The Three Faces of Eve, Four-Girl Ensemble, Brains and Brawn. Subtrope to Brains Versus Brawn.