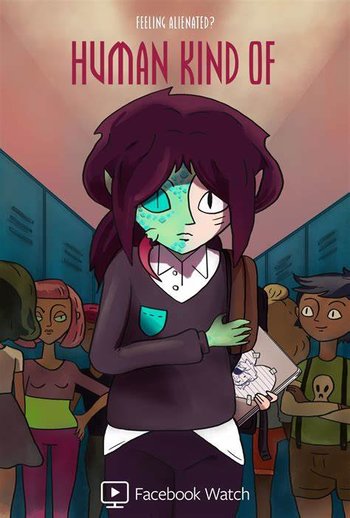 Iris: "I want to tell you three important things. One, congratulations, sweetie! You finally got your first period! Two, your father was probably an alien. And three, I love you very much, and everything is going to be fine."
Advertisement:

On the morning of her sixteenth birthday, Judy Reilly awakens to discover that there is a giant talking blood clot underneath her bedsheets. After appropriately freaking out about this turn of events, she learns from her mother that she's "96% sure" that her daughter's estranged father was an extraterrestrial. Oh, and that they should probably give chase to that weird abomination that just jumped out the bedroom window and started devouring the residents of the town.

Created by Diana McCorry for the oft-overlooked video service Facebook Watch, Human Kind Of is an Annie Award-nominated Science Fiction comedy that follows Judy Reilly, a nerdy teenager who discovers that she's actually a Half-Human Hybrid with a wide array of special abilities, most notably voluntary shapeshifting. With the help of dangerously upbeat mother, Iris, comic book-obsessed best friend, Cory, and a few allies hiding in the shadows, Judy may just manage to make her way through the minefield that is adolescence, learn to control all her powers, and inevitably discover what makes her both alien and human along the way.

The series aired its single season from September 16 to October 28, 2018 and can be viewed here