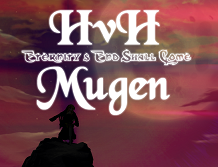 "The Fate of those who fight is to die."
"It all began with a phone call."
—Tohno Shiki
Advertisement:

One day, a random Mugenite was bored and lacked ideas for creative videos. Then a friend of his linked him to a friend who's doing a M.U.G.E.N series. Inspiration struck and he made one himself. HvH MUGEN was born.

HvH (It's suppose to mean something, but that is up to the viewer to know) is a MUGEN series created by solkenneth003 (aka sol003) that originally started out with the name New Age MUGEN, and acts as a crossover between Melty Blood and Touhou Project with his Original Characters as the focus. Interspersing MUGEN battles with Visual Novel styling, the series has since then expanded to have six chapters (with an additional Perspective Flip chapter), which also caused New Age MUGEN to eventually enter Canon Discontinuity. It's currently on it's 5th Chapter Run, with the plot being written by malice600.

The series focuses on different themes with each chapter and always contains different protagonists, allowing for different focus each time.

The rest is seen here

It's done with collaboration with his Childhood Friend, malice600

A few notable friends who help him include FateofTime

He also has help from DevilRaptorB

(They are also doing their own series which can be found here: [1]

Also has a site with some snippets of backstory regarding each characters here.

Warning: The series itself has a tendency to perform Plot Twists so there's most likely spoilers when going through here.

HvH MUGEN provides some examples of:

"And about damn fucking time you finished this. Now go make another one!" -malice600